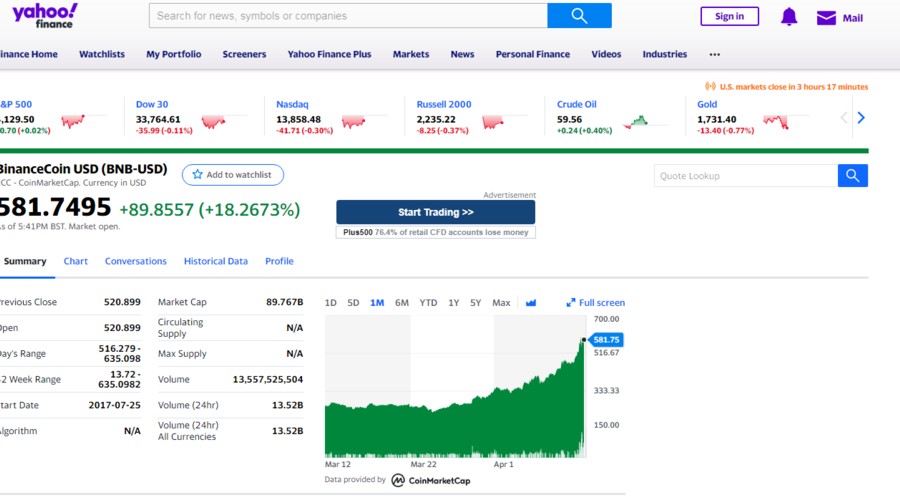 Binance Coin (BNB) is outrunning the competition. The third-largest cryptocurrency by market capitalization gained 70 percent in value within the last seven days alone and currently stands at a price of around 590 US dollars. In terms of market capitalization, the proof-of-stake coin is slowly but surely becoming dangerous even to its competitor Ethereum (ETH). After all, the market currently values BNB at a reasonable 91 billion USD. ETH, however, still has a market capitalization that is almost three times as high at USD 248 billion.

In the annual chart, the performance of BNB is no less impressive. The coin, which forms the core of the Binance Smart Chain, has gained a whopping 1,464 percent since the beginning of 2021. That is record-breaking. In the crypto top 10, BNB is the absolute top performer and even beats Bitcoin (BTC) by a long way.

The reasons for the ongoing bull run can be quickly identified. With a volume of 36 billion USD, Binance is still by far the most liquid Bitcoin exchange on the planet. By comparison, Coinbase, in second place, “only,” has a normalized volume of USD 2 billion. So anyone who wants to participate in the highs of the exchanges without having to buy securities such as the soon to be issued Coinbase shares has done well with BNB so far.

Furthermore, BNB is likely to benefit from problems surrounding competitor Ethereum. Because recently, the second-largest cryptocurrency groaned under horrendous transaction fees (so-called gas fees), which makes the use of specific smart contracts economically impractical. The Binance Chain is positioning itself to overtake ETH from its slipstream.

BNB should also benefit from the chaotic implementation of ETH 2.0. It is still unclear when the conversion of the network to Proof-of-Stake (PoS) will be completed. Meanwhile, competitor BNB is running flawlessly under the alternative consensus mechanism.

Meanwhile, Binance continues to expand its product range. The latest news is that the Bitcoin exchange, which finally found a home in Malta after an odyssey worldwide, is now also doing business inequities. Customers can now trade synthetic securitizations of shares in the token form on the platform. According to the press release, Binance denominates the securities in its in-house stablecoin BUSD and even allows fractional securities to be traded. First, the exchange, founded by Changpeng Zhao, is launching Tesla shares, one of the best-performing stocks of the past year.