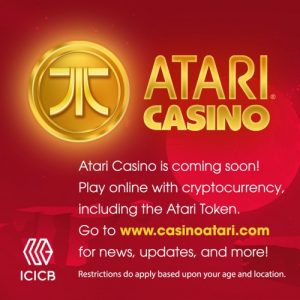 Atari is launching the new “Atari Casino,” powered by Decentral Games. The platform is set to launch in May and will allow users to play online casino games with cryptocurrencies.

The first “community-owned” Metaverse casino platform – Decentral Games and Atari. It is now set to launch in May.

Decentral Games offers its users a 3D casino gaming experience via the Ethereum-based virtual reality platform Decentraland (go to the Ethereum buy guide). The partnership with Atari now gives it a dimension all its own.

It will be a 20-parcel casino estate located in the Vegas City casino district on Decentraland.

According to Decentral Games, holders of its native DG token and the Decentral gaming community will benefit immensely from the upcoming Atari casino. About 88% of the profits will be allocated to its DG DAO Treasury.

Last month, it was reported that the DG DAO Treasury has grown from $1.8 million to $2.4 million.

Users will access the casino by using MANA, DAI, and Atari’s own token, ATRI.

Decentral Games is trying to capitalize on the NFT boom by giving away exclusive NFT prizes during the Atari Casino launch. Platinum-selling DJ Dillon Francis is announced for the launch.

The company promises players that the casino will offer a “refreshed, modern experience,” plus it has now been opened for beta testing.

The new Atari partnership will allow users to put their DG in the DAO governance contract. As a result, stakers will have the right to vote on ecosystem decisions, just like other DG holders.